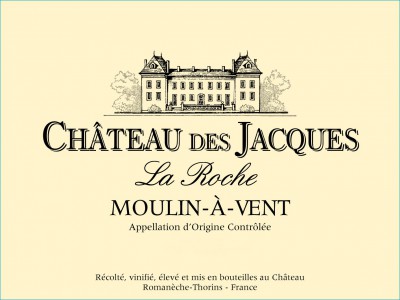 Situated at the top of the slope, just below the famous windmill, our parcel extends south-eastwards. Its sandy soils, which are exceptionally thin and low in water reserves, push Gamay to its extremes in years with low rainfall.

Picked and sorted by hand, then mainly de-stemmed, the grapes macerate slowly over the course of three or four weeks. Indigenous yeasts are used throughout the fermentation period, and extraction by means of both plunging and pumping over takes place on a regular basis.

The wines are aged in our historic cellar for 10 months, a period spent in oak barrels, both old and new. The oak used to make the barrels comes from the forests of Alliers, the Limousin and the Nivernais.

La Roche is a wine of great tension, with lots of minerality and precision. It is very linear in style, a characteristic that makes it a particularly apt match for complex and refined dishes.

The torrid heat of summer was interrupted at the start of August, which saw the arrival of some slightly cooler weather and, even more importantly, some rainfall. This allowed the vines to finish their ripening in more or less ideal conditions. Nevertheless, the rainfall was not copious. In the north of Beaujolais, particularly in the vineyards planted on pink granite - Moulin à Vent, Fleurie and the heights of Morgon - rain was scant, and there was limited water available for the vines' roots. As a result, volumes of 2015 wines from these Crus are extremely limited, and the berries we harvested were tiny, with notably thick skins. Even though the sugar levels we saw in our first analyses dating to around the 20th of August were impressive, we opted to wait until the 31st to harvest in order to ensure optimal phenolic ripeness, the key criterion in this vintage.
Although pale in colour, the Chardonnays from Clos de Loyse are notable for their intense bouquet, a blend of citrus fruits and flowers, and their richness. The Gamays show exceptional depth of colour, an intensity of fruit that is well above the norm and firm, silky tannins. 2015 is a vintage of the calibre of 2009 - or, for those with longer memories, 1947 - it has all the makings of a very great vintage indeed, and thus merits the special attention we are paying to the wine aging.

The wine needs two or three years to reach its harmony, and can then age comfortably for several decades.

Although the winter period of 2014-2015 was not in any way exceptional, it differed from the previous year, the third warmest winter since 1900. After a relatively mild December, winter began in earnest afterChristmas, and the Beaujolais region endured some typical seasonal temperatures and several episodes of snow, some of which even fell on the plain (as well as on the higher hills).
The arrival of spring coincided with the return of some sunshine and a bit of drought, which led to budbreak at the start of April - showing some delay on the average of the past 20 years. April and May were notable for their low rainfall and some record heat spikes, some of which were 9 or 10°C above the seasonal average. As a result, the vines saw some rapid growth, with not a trace of powdery or downy mildew, and flowering took place in ideal conditions at the start of June.
The arrival of summer was marked by the first heatwave of the year. We saw the first hint of veraison in our cordon-trained vineyards in Carquelin as well as our ancient bush-trained vines of Grille-Midi in Fleurie before the middle of July. This precocious ripening was a strong suggestion that harvest would take place in August, for the fourth time since the start of the current century.