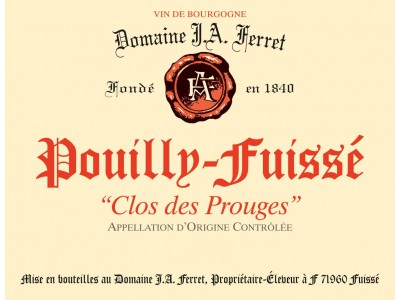 Situated right in the centre of the village of Fuissé, this Clos is just over two "hectares" in size and is planted on a shallow slope that faces east.

Age of the vines

Although a small parcel of vines was planted in 2003, most of the vineyard dates back to 1956, and is therefore more than 60 years old, making it one of the oldest owned by the domaine.

The soil is derived from limestone-rich marls deposited during the upper Bathonian.

Fermentation and maturation took place in barrel, of which 20% were new and 80% were 2nd, 3rd and 4th use. Maturation lasted 10 months, then the wine spent a further 8 months in stainless steel tanks on fine lees. Then, on the afternoon of 16 March 2020, much like the rest of France, the wine was confined (in glass bottles, in this instance);

Despite its typically Fuissé opulence, this wine is also capable of demonstrating great precision. On the palate, this wine is so notable for its sculpted precision as well as its fleshy, juicy character.

The mild conditions that prevailed throughout January and temperatures that reached more than 20°C by mid-February were the earliest hints that this was going to be an unusually challenging vintage. No one mastered nature's trials in 2019. And, unlike the prevailing conditions in 2018, water reserves at the end of winter were already low, so there was already a noticeable water deficit by the time the vegetative growth kicked off.
The somewhat scary mildness of winter was followed by a painfully cold spring. In April frost ravaged some of the budding vines at the heart of the village of Fuissé. Luckily, however, the vines planted on the slopes were spared.
As in April, the temperatures in May were below the seasonal norms. Any precocity shown by the vines as a
result of winter's gentleness melted away like a snowdrift on a sunny day. By the end of May, we were looking at some 13 days of delay relative to the previous year.
At the start of June the first flowers brought great promise. The number of incipient bunches seemed almost abundant... But our hopes were dashed by poor fruit set, in Fuissé at least. Harsh winds gusted across the amphitheatre of vines, reducing some of the promised generosity, then the bunches had to survive an unprecedented early heatwave. But all was not lost. June also saw some rainfall that was more abundant than the average for the decade. This gave us a glimmer of hope.
There were no surprises in store for us in July - it's warm,dry conditions were pretty much in line with current norms. We had no need to fear the development of downy mildew this year, although powdery mildew was pretty aggressive.

Amazingly, veraison rolled out fairly homogenously around 5 August. Several rainy episodes brought usboth water and hope. Towards the end of August, the bunches in the Tournant de Pouilly weighed less than 50 grams. Skins were still very hard. We waited. We waited for ripening to proceed, we waited for the skins to soften, we waited for the grapes to reveal their flavours.
Despite the quasi-Mediterranean conditions, we began picking on 10 September, scarcely earlier than in the Côte d'Or, or even Chablis.
We struggled to fill the picking bins, even though we continued to cut. The musts were both pure and concentrated, with elevated sugar levels and unexpectedly high acidity.
On 23 September, the winery doors closed on our modest harvest.