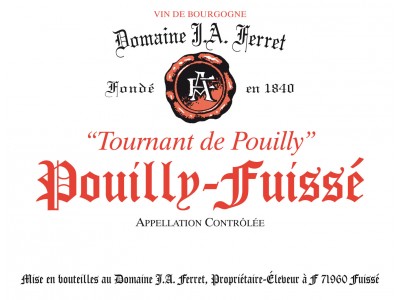 Situation: Based in the northern part of Fuissé, just on the borders of the hamlet of Pouilly, the « Tournant de Pouilly » is a vineyard of one hectare in area, split between two parcels, planted on a gentle slope that faces north-east.

Age of the vines: Planted by Jean-Alfred Ferret in 1995, 1963 and 1964, the vines from this parcel are, on average, a little bit older than 60 years old, one of the oldest vineyards owned by the Domaine. A small parcel of 15 "ares" was replanted in the spring of 2018 after having lain fallow for several years. This particular parcel of young vines won't make it into the cuvee for several years to come.

Soil: This deep clay loam soil contains lots of limestone, but little in the way of stones. It is derived from the pale loams of the Dogger.

Vinification: Fermentation and maturation took place in barrel, of which 20% were new and 80% were 2nd, 3rd, 4th use. Maturation lasted 10 months, then the wine spent a further 8 months in stainless steel tanks on lees. On 18 March 2020, during the period of confinement, the wine left our cellars, confined in sympathy in its final glass vessel.

Tasting: A restrained nose unfurls to reveal notes of green almonds and lime leaf. The palate is pure and mineral-driven. This is precise, delicate wine, more restrained in this vintage than usual.