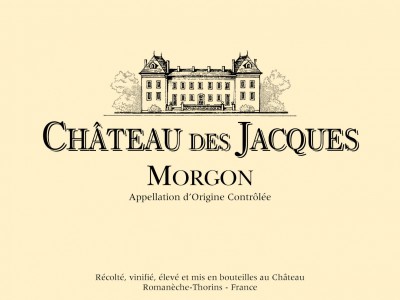 This wine is a blend made from three vineyards within the appellation of Morgon : Côte du Py, Bellevue and Roche Noire. They are planted on pink granite or on diorite: the blue rock landmark of Côte du Py. The depth and alteration of these soils vary from one vineyard to another.

Picked and sorted by hand, then often de-stemmed, the grapes macerate slowly over the course of three or four weeks. Some pigeage and pumping take place during the fermentation period, according to the vintage.

The wines are aged for 10 months in concrete tank and in oak barrels, in our historic cellar ; new oak, one, two and three vintages old barrels. The oak used to make the barrels comes from the forests of Allier, Limousin and Nivernais.

This Morgon individual character originates from the rich volcanic soils on which it grows. Although firm and powerful, the tannins show the Gamay typical suppleness. This deep wine with violet aromas will perfectly match all sorts of dishes with great personality.

The wine needs two or three years to reach its harmony, and can then age comfortably for several decades.

After a December in which the weather conformed to seasonal norms, January saw a precipitous drop in temperatures, with the mercury stuck below zero for the best part of a fortnight. Despite this chilly episode, the first three months of the year were fairly clement, thanks in large part to the mild weather of February and March. These conditions sparked an early awakening in the vines, with the first buds opening during the last days of March in the bush vines of la Rochelle - a whole week early on the average of the past 30 years. With the arrival of spring came the widespread realisation that we were in a period of drought that was to last several months.

Favourable weather continued to dominate throughout the early weeks of April, but a dramatic change arrived around the 20th, when temperatures plunged and we began to fear a repeat of the great frosts of the previous year. Thankfully, only a few rows of Chardonnay were affected. The largely sunny conditions of April and May permitted the vines to continue their growth, and flowering began on 1 June. The end of spring unfolded in idyllic sunny, warm conditions, suggesting an early harvest along similar lines to those of 1997 and 2007.

On the morning of 10 July, just as the bunches began to close up, we finished up the main viticultural tasks of the season and began to anticipate the reception of the grapes in our new winery with great excitement. Then disaster struck. At the end of the afternoon, a devastating storm ravaged most of the cru zones, from Regnié to Chénas, affecting pretty much all of our vineyards. Around the 20th of the month, while the vines were recovering from their injuries and just as the first berries became tinged with colour, a new hailstorm attacked the Côte du Py which, up until that moment, had escaped the damage unscathed. Calm weather returned in August, which allowed the vineyards to regain some of their equilibrium, and a heat spike during the last week of the month accelerated the ripening process. The rain we had been waiting for finally fell, bringing an end to the drought and creating fresher conditions that helped bring about optimal ripeness.

Thick skins, rich in anthocyanins, nut-brown pips, all the elements were in place to give birth to a good vintage. The key to ultimate success was the ability to adapt ourselves to this unusual year, in which the hail had created huge disparities in the vineyards. While the first bunches in the Côte du Py were harvested on the 1st of September, we waited until the 20th to pick individual berries from the most damaged bunches and from the Syrah, the domaine's new babies. Harvest at the Château had not taken place over such an extended period in living memory.

In a nutshell, 2017, from January through to August, had provided a textbook example of the effects of climate change. The unusual weather patterns in Beaujolais, which lies at the crossroads of continental, Mediterranean and Atlantic influences, explains both the climatic extremes that affected us and the unique style of our wines. In 2017 the whites from the Clos du Loyse show a vivid brightness as well as their typical richness, and the reds, which are currently maturing, show a remarkable purity of fruit and an unusual density of flavour, a good omen for the vintage's potential quality.